Alas, Mr. Shakespeare’s life has ended tragically.  Sadly, it was a rather short life out in the garden.  He was lovingly planted by my son, Kai, back in January.  Next to him were planted his ‘brothers’ Graham Thomas and Abraham Darby.


Back in January, my three youngest children were so excited to plant rose bushes in our back garden.  We selected three David Austin English Roses, based on our local rose society’s recommendations.

All the kids pitched in in helping to dig the holes, amend the soil and plant the roses. Under the watchful eye of Tobey, who will play a part in Mr. Shakespeare’s story later, we planted all three roses. They were tiny, but we eagerly awaited the appearance of our first roses. Although, Mr. Thomas was in a hurry to bloom before his brothers, he bloomed before his stems were large enough to hold up his roses.

Now Mr. Darby was not in a hurry and made sure he could hold up his flowers before they bloomed. While both Mr. Thomas and Darby were producing numerous blooms, Mr. Shakespeare did not grow as much as his brothers and made no efforts at producing any rosebuds.

Then one day, my son came running in the house to tell me that he saw a single rosebud on his rose.  He was so excited because it had been a little tough on him with both of his sisters having rose bushes with lots of blooms.
We waited and waited for the rosebud to open and one morning when I went outside, there it was…. I rushed to take a picture of it and couldn’t wait for my son to come home so I could show him his rose.

When he arrived home, we went out to the garden, but the rose was missing.  Where could it be?  There was just a stem sticking up where the rose used to be.  Then, I noticed what looked like red confetti scattered on the back lawn.  Well, it turned out to be rose petals.

Guess what happened to the single rose? Here is the culprit – Tobey.  Evidently, the rose looked like it was something fun to play with, because Tobey just bit it off and tore it up.

My son, Kai, was disappointed but then decided he wanted to play football with his dad and promptly forgot about his destroyed rose.

As for me, I lavished extra attention on Mr. Shakespeare, determined to make him produce more blooms.  But my efforts were futile.  Summer came and he went into summer dormancy, which is what most roses do during the summer heat – they just exist and stop producing blooms until fall.

Last week I went out to water the roses and was happy to see Mr. Darby and Thomas doing very well.  Then I turned my attention to Mr. Shakespeare and to be honest, I had to look closely to find him.

Can you see him? If you can see a few brown sticks amidst the bark mulch and fallen leaves from last week’s storm – that is what remains of Mr. Shakespeare.

I am not sure what happened to him…..he received the same treatment as his brothers but it did not seem to do any good.  Sometimes there are no easy answers as to why some plants die and some survive.  I am always telling this to my clients and now I am saying it to my son.

I was ready to dig Mr. Shakespeare up when I noticed a touch of green at the base.  I do realize that it is probably hopeless, but I will keep him in the ground to see if he can resurrect himself and maybe turn this story into a happy one 🙂
**I hope you all have a great week.
My kids are back in school and my life is getting back to normal.  Today I am taking my first knitting class and my mom (Pastor Farmer of Double S Farms) is joining me.  I can hardly wait!

First Roses of the Season Impatient To Grow Up.... 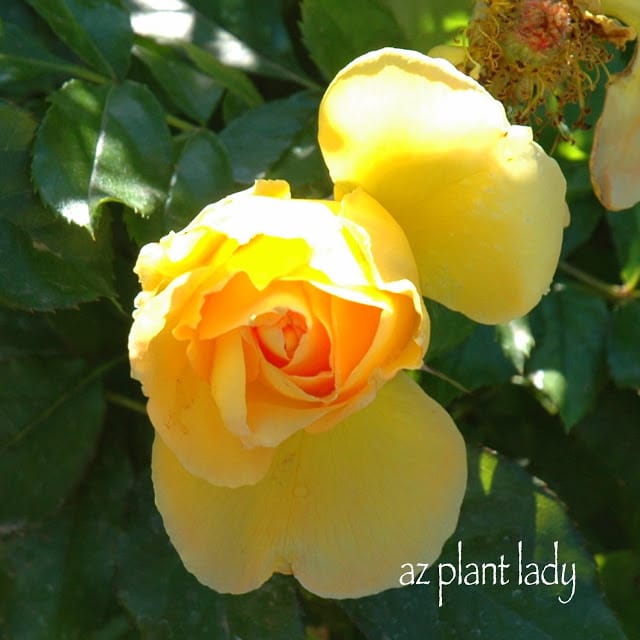 Sunset in the Garden….
Scroll to top