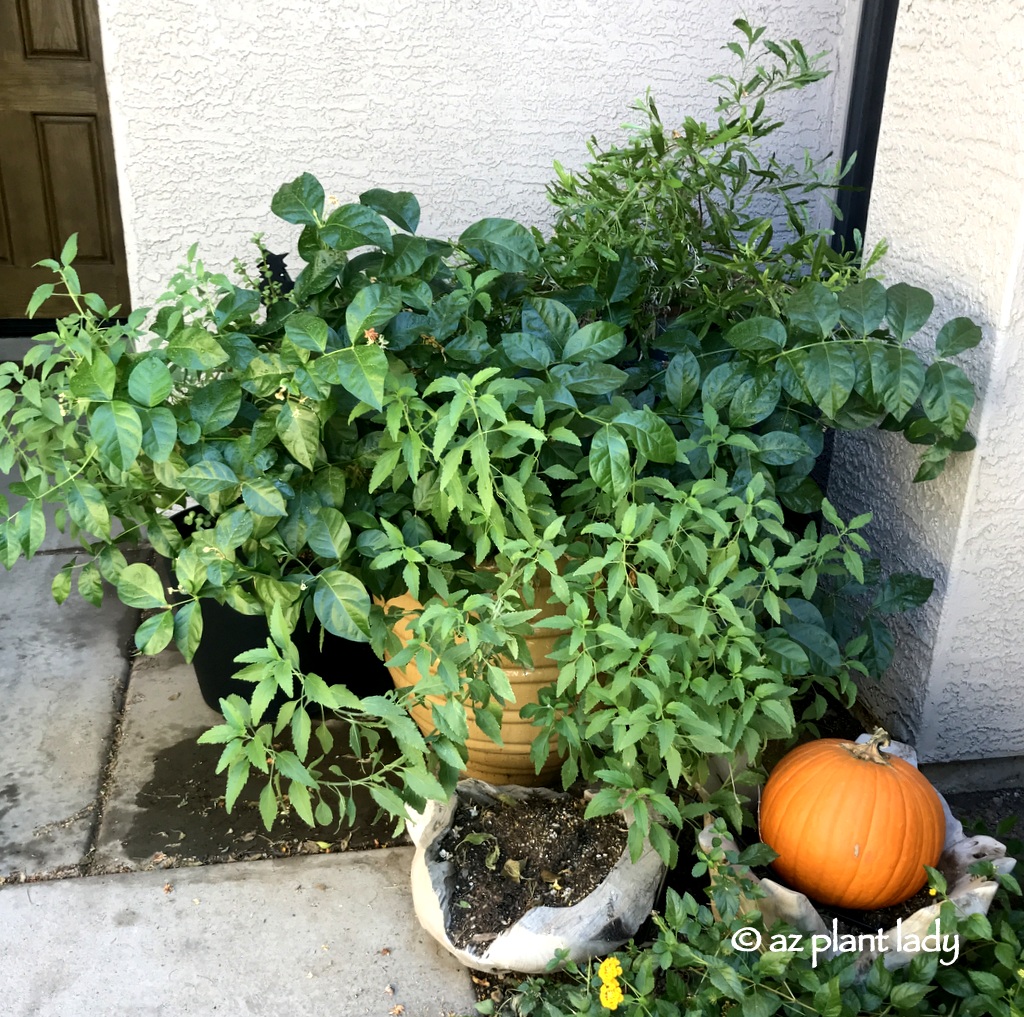 I’m about to show you my messy container plants, which have been sadly ignored for the past few months. Shocking isn’t it? I’m embarrassed to show this to you, but I’m the first to admit that I’m not a perfect gardener. Sometimes, life gets in the way of garden maintenance tasks, and since I don’t have my own personal gardener on my payroll, my plants sometimes look like this.

While the plants are perfectly happy and healthy, they are messy, and you can’t even tell how many plants and pots there are.

The center pot is filled with a lush green Arabian jasmine (Jasminum sambac) shrub and some overgrown ‘Victoria Blue’ salvia. Arabian jasmine loves shade and can handle filtered shade too. It’s fragrant white flowers greet visitors who pass by it on the way to the front door. As you can see, it does well when planted in the ground or a large pot. I planted this arrangement of plants last year and was inspired by a collection of containers that I saw in California. I love the combination of plants known for their foliage and wanted this for my front entry. Needless to say, mine doesn’t look like this and won’t without a little attention from me. This is my succulent container that is filled with a single ‘King Ferdinand’ agave (Agave ferdinandi-regis) and elephants food (Portulacaria afra). I started in by pruning the most prominent plant, the Arabian jasmine. Using my hand pruners, I cut it back, removing approximately 2/3 of its total size. The ‘Victoria Blue’ salvia was cut back as well, but it is on its way out as it’s usually used for as a warm season annual, but it may come back and bloom for me before winter arrives. As I pruned back the overgrown jasmine, I discovered a forgotten trailing plant that I had added several months ago. I can’t remember what it was – perhaps bacopa or scaevola. That looks so much better! The Arabian jasmine will grow back a little before the cold of winter halts its growth. I lightly trimmed the elephants food and tied up the hop bush to a wooden stake to help promote more upright growth.

In about a week, I’ll add some flowering annuals to the black pot, and I’m open to suggestions. *Do you have a favorite cool-season annual?