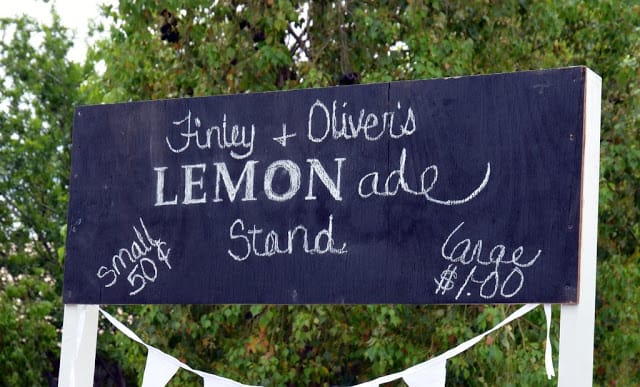 This past Memorial Day, my mother had the entire family (minus my daughter, Rachele, who is in the Navy) over for brunch to celebrate the beginning of summer.


As we drove up to the farm, we were greeted by the following sight…

My nephews along with my son, Kai, were selling lemonade made from the lemons from the backyard tree. They had quite a few people buying a refreshing cup of lemonade, including my son-in-law, Jeff. Kai and the boys were kept busy filling cups with lemonade.  In addition, they also sold homemade jam made from the peach trees. My daughter, Brittney and Lily (my granddaughter) came over too and Lily got her first taste of lemonade. As we entered the house, we were greeted by delicious smells of eggs, sausage, fruit and cinnamon rolls.

I couldn’t wait to finish eating so that I could go outside with my mother to see what was growing in her vegetable garden. She was most proud of her Russian gourds. Okay, they really aren’t Russian, but my sister-in-law brought the seeds in Russia for my mother.  You can buy the same gourd seed in the US.

But, we like calling them Russian gourds because it sounds more fun and exotic. Her pattypan squash is also growing well, above.  This summer squash is a lot like zucchini.  My mom plans on cutting it into small pieces and adding to salads, much like you would cucumbers. Her sunflowers provided much appreciated shade for the garden as well as seeds for the birds.  My brother considered trying some of the seeds. If you want to keep the birds from eating the seeds, you can place a paper grocery bag on top of the flowers. Lots of zucchini were beginning to form.  If you are relatively new to vegetable gardening, then zucchini is a great vegetable to get started with in the summer.  They are easy to grow and there is something so satisfying when you bring a large one inside. Then it was time to celebrate Kai’s birthday.  He is now 11 years old. His favorite gift was a ‘Navy’ hat from his big sister, which we bought at the Naval base after we saw our daughter graduate. His second-favorite gift was a huge squirt gun from his grandma.

Late May is also the time that we pick peaches from the trees. So my mother and I headed out to pick some peaches for me to take home so that I could make peach jam. I love making peach jam and enjoying it throughout the year. The peaches, above, were picked from my own peach tree.  We planted it in January and I was quite surprised when it produced so many peaches.  But, I certainly wasn’t complaining 😉

Of course, I didn’t have enough peaches from my own tree, so I used those that I picked from my mother’s trees to supplement my own. When you pick peaches, use them the same day if possible because they are so soft and bruise so easily.  I waited only one day and already had some soft spots on my peaches.

My mother taught me how to make peach jam a few summers ago.  I blogged about it back then in “A Harvest Of Peaches and Jam”

I wanted to thank those of you who left such kind comments regarding my last post about my daughter Rachele’s graduation from Navy basic training.