Spring is my favorite time in the garden.  Is it yours?

Plants are in full bloom and my vegetable garden is filled with both cool-season and a few warm-season crops.

Today, I thought that I would take you to the ‘farm’ to see how my mother’s vegetable garden is growing. 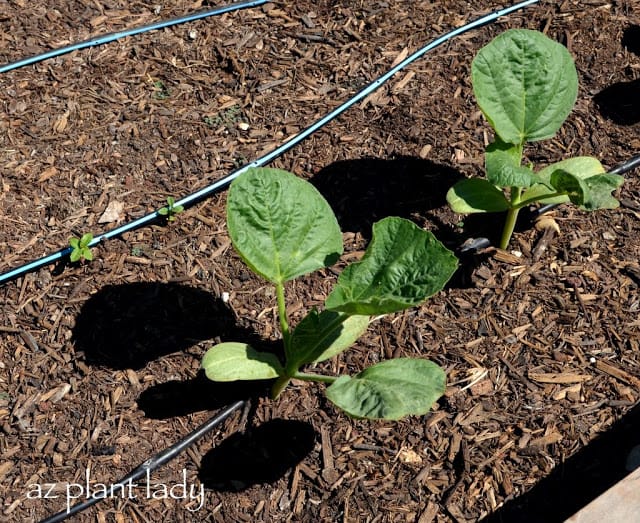 The ‘farm’ is nicknamed “Double S Farms” by the family.  It is just down the road from our house and is a favorite place for all the family to gather. My mother has two raised vegetable beds and she loves tending her vegetables.

One bed is dedicated to cool-season crops that will soon give way to warm-season vegetables. She still has lettuce growing, which she uses to make delicious salads when we all gather together for dinner on Tuesday nights. The broccoli has gone to flower, but it looks so pretty, that she keeps it in the garden.

Do you see the orange flower in the background of the photo, above?  That is a marigold, which is a great ‘companion’ plant for the vegetable garden because it helps to repel bad bugs who might eat her vegetables. While we spend time looking at the vegetable gardens, the neighbor’s tortoise stops briefly, to see what we are doing from the other side of the fence. The second vegetable garden was built by the family as a surprise for my mother’s birthday over a year ago.

She has started her warm-season crops in it, including tomatoes, summer squash and gourds. Sugar snap peas (one of my favorite vegetables) hang from vines growing on a small trellis. The newest vegetable bed is also home to… A toad, which is helpful with insect control.

He recently moved from his previous home next to the chicken coop.  My nephew, who is a Star Wars fan, gave him a special name. While the toad keeps bugs in control around the vegetable gardens – Francie, the resident ‘naked-neck’ chicken, patrols for bugs outside of the garden.

As you can see, spring has sprung at the family farm.

Soon, summer will be here which heralds another favorite activity… How about you?
What is growing in your garden this spring?

Will you grow something different this year?

There are few types of vegetables that don’t always survive winter in my zone 9a garden without protection when temperatures dip below freezing.


In the past, I have protected my San Marzano tomato plants with success by covering them completely with frost cloth.


This year, I decided to protect my bell pepper plants.  The reason was because they were producing so well up until December and I didn’t want to have to wait a long time for new peppers.

I believe I’ve told you before that patience isn’t my strong suit. Of course, this was the winter when we broke records with temps in the low 20’s for five days in a row.  I wasn’t sure that my peppers would survive, even with protection.

The upper leaves did suffer frost damage and had to be cut back.

I wasn’t sure if the base would form new leaves.  I have been checking every week now that the temperatures are warming up.

Guess what I saw last week?

There are new leaves growing from my pepper plant!  I can hardly believe that it made it through the coldest winter we have had in over 30 years.

What warm-season vegetables have you been able to over-winter?

I recently re-planted my herb container for the cool-season.

Last spring, I planted my container with rosemary, green basil, purple basil, sage, thyme and oregano.  All of these herbs do well in the warm-season and I enjoyed being able to step outside the kitchen with cut fresh herbs whenever I needed them. You can read the post here, to see how to grow herbs in containers.
I also did a “How-To” video about this too 🙂

Okay, so now that cooler weather is on its way, I wanted to add some different herbs that would do well through the winter in my zone 9 garden. I planted Dill, Garlic, Lavender, Parsley, another Thyme and kept the Sage the I had originally planted.

My kids added some of their Petunias that their grandma bought them in the container too, which will add some nice color.
Other herbs that can handle cooler weather in USDA zones 9 and above are Cilantro, Chives, Fennel, Lemon Grass and Rosemary.

I highly recommend planting your own herb container.  It is very easy and so fun to be able to harvest your own herbs!

There is a gardening task that I both enjoy and dread when I have to do it twice every year.

Now, I am not only doing it for myself, but also for my mother-in-law.

So what it is this task?

The seasonal task of changing out flowering annuals or in this case perennials, that are treated as annuals.

I had to this last Sunday when we stopped by for dinner.  Since my father-in-law’s death in September, we come over with the kids every Sunday and help around the house and garden and then have dinner.

My mother-in-law hasn’t felt like cooking much and likes the idea of having us trying a different kind of pizza each week in order to determine what restaurant makes the best.  So far Papa John’s and Pizza Hut are our favorites….but there are still more to try.  The kids especially enjoy eating pizza every week 🙂

I blogged earlier about searching 3 different nurseries for plants to replace those that had died in my mother-in-law’s garden.  But, I also had to buy Geraniums (Pelargoniums) as well.
Now, I couldn’t buy just any Geraniums….I had to buy red ones – not orange and definitely not pink.  You see, my mother-in-law wants the garden to look the exact same as it did when my father-in-law was alive and did the work himself.
I must admit, that I was a bit late in doing this – I usually wait until late October to change out my warm-season flowering plants for cool-season ones.  But, there was still plenty of time before the cold weather settled in.
Okay, here is that part that I dread…. It is so hard to pull out beautiful flowering plants.
Now I realize that technically, I could leave them in their pots and these Vinca would survive our winter as long as they were protected from frost and would flower again in spring.
Or, I could transplant them elsewhere and overwinter them in an out of the way place.
But the majority of people just rip them out and throw them out (or put them on their compost pile) since they are relatively inexpensive.
I admit that I pulled them out and threw them out (please don’t hate me for pulling out perfectly good plants 😉
Now it was time to plant the red Geraniums (which are really Pelargoniums, but everyone including the nursery calls them Geraniums, so I will too).
There was a potential problem, however.  You see, my mother-in-law was used to my father-in-law planting huge, red Geraniums in full bloom.  But, I could not find large red Geraniums, much less ones in full bloom… From a horticulturist’s point of view – it is better to select flowering plants that have few flowers in the nursery because the transplanting process is stressful for plants and those in full flower will soon drop their flowers.  When buying those that haven’t bloomed yet, you give the plant more resources to grow roots and will soon be rewarded with blooms that will last longer.
I was tempted to tell my mother-in-law this, hoping that it would make her feel better about the lack of blooms.  But it turns out that she didn’t mind, so I didn’t tell her.
I sprinkled slow-release fertilizer before I planted the Geraniums and will follow-up in a couple of weeks with a liquid fertilizer, just like my father-in-law did.
Of course, you can go the organic route if you prefer.  There are plenty of products available at your local nursery and even stores like Home Depot and Lowes are carrying organic fertilizers.
In addition to the red Geraniums, I also had to plant Bacoba around the potted Geraniums.  It can be hard sometimes to find Bacoba and of course I had trouble too.
But, I found a solution.
I found a decorative container filled with Verbena and Bacoba at the nursery, so I bought it and used the Bacoba in the container. And then my husband planted the Verbena, which replaced the one that died in their front garden last year…