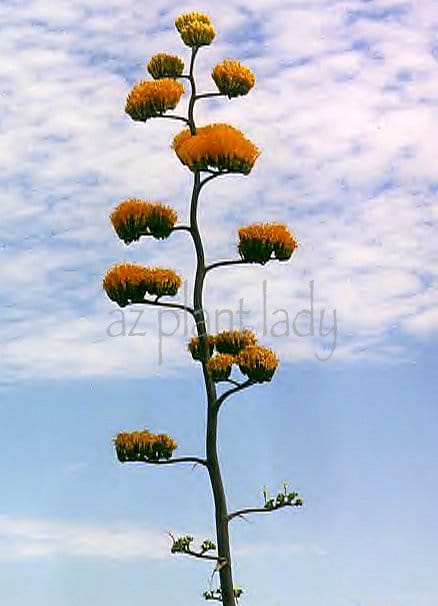 Imagine a plant that lives for years, never flowering, and then towards the end of it’s life, expends all of it’s energy to produce flowers on a giant stem and then dies…. Agave colorata getting ready to flower.
The story begins with an agave starting to grow it’s flowering stalk, or inflourescence.  The growth is incredibly fast, growing up to 1 ft. each day.  Depending on the species, the flowering stalk can reach heights up to 40 ft. Agave murpheyi sending up it’s flower stalk.
*I took the picture, above, at a client’s house and she referred to the flowering stalk as an ‘asparagus stalk’ because that is what it looks like.
When most people think of Agave, they think of the Century Plant, (Agave americana), and believe that it will flower once it reaches 100 years old.  This is actually a myth.  Although the timeline can vary, Agave americana does not live that long and flower much sooner.  There are over 250 agave species and most flower towards the end of their life and then die.
Actually, the length of time an agave lives is largely dependent on the species.  In my experience in the managed landscapes, most agave live approximately 5 – 15 years, once planted from a 5-gallon container. I am not completely sure what species this particular agave was.
Note the ‘pup’ growing from the side of the agave.
There are two different styles of the flowering stalk (inflourescence).  The paniculate, above, and the spiculate, below. Octopus Agave (Agave vilmoriniana)
I planted this agave (as a 5-gallon) in 1999 and it flowered in 2005.
Agave reproduce both by flowering (seeds) and vegetatively (bulbils & offsets).
You can read more about how agave produce offsets (pups) and how to plant them from a previous post – Pups In The Garden…Not The Soft Cuddly Kind. The flower of an Smooth Leaf Agave (Agave desmettiana)
This is an agave from my garden, which was planted in 1998 and flowered in 2007.

You can see the small bulbils (baby agave) forming among the flowers above.  The bulbils will continue to grow and will receive nourishment from the stalk.  If left alone, the bulbils will eventually fall to the ground and root under ideal conditions.  They can be removed from the flowering stalk and planted, but do best if left until they have formed at least four leaves.

An agave in the desert that has died after flowering. Bulbils on the flowering stalk of an Octopus Agave (Agave vilmorniana)
They are ready to be picked off and can be planted in well-drained soil.
Early on as a horticulture student, I fell in love with Octopus Agave and I bought my first one at a plant sale.  I planted it in a large pot and it thrived.  Years later, the flowering stalk started to grow.  I was both excited and a little sad.  I was happy because it was finally achieving it’s crowning glory….and sad because I knew it would eventually die at the end after finishing it’s life’s work. However, that is not the end of the story….my original Agave lives on.  I took two bulbils from it’s stalk and planted them (above) and they are ready to be planted out in my garden. (Actually, I could have planted them much sooner).
**Note the little seedling coming up on the left side of the pot.  My son planted the seed, but we aren’t sure what it is.  I think he might have planted an apple seed.  We shall see….

What's Wrong With This Landscape: The Answer

Pups In The Garden...Not The Soft, Cuddly Kind
36 replies

Early Signs of Spring on the Farm….
Scroll to top