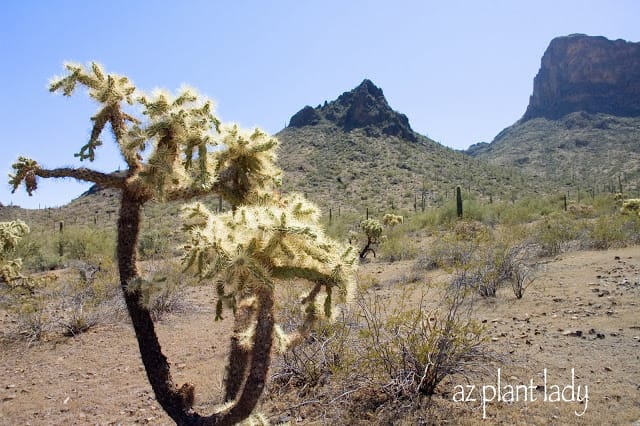 That was my first thought when I came out to Arizona as a young bride over 23 years ago.  Brown mountains, strangely shaped cactus and words like ‘javelina’, ‘dust devil’, ‘haboob’ and ‘gila monster’ that meant nothing to me were soon to become part of my new world. I grew up in Southern California.  I loved the beaches, the beautiful tall mountains, the rolling hills and the trees.  I had spent two years attending college in California and my dorm room had a view of the ocean and I could see the Channel Islands on a clear day.  My entire family lived in California and I was sure that I would never leave.  But, then fate intervened….I fell in love with an Arizonan.

Before I knew it, I was married and driving across the desert to Arizona.  Now, don’t get me wrong, I thought Arizona was pretty in kind of a stark, prickly way.  I mean, who doesn’t like how cool Saguaro cacti look?  But, I was homesick for the bright and dark green colors that had been a part of the landscape I had grown up in.

There were trees, but not as many as I was used to.  Areas of grass
were more limited and were bordered by concrete curbing.  The rest of the ground was covered by small rocks, called gravel which came in different kinds of colors.  And people placed large boulders in the landscape on purpose. Once my eyes had adjusted, I realized that the desert was quite green.  But the green colors were much more subtle with hues of gray and blue mixed in.  Coming from an area with dark green plants had made me temporarily blind to the green beauty of the desert. My oldest daughter in our backyard – 1992

I had dabbled a bit in gardening in California while growing up, but nothing serious.  What made me a gardener was the purchase of our first house in Phoenix.  We bought a home with a large yard which included 3 mature citrus trees, 3 roses and 10 California Fan Palms and I had no idea what I was doing. My second oldest daughter and friend playing in the irrigation water as DH watches.
Berms along the edges keep the water from running out into the street.
Even more interesting and this is an Arizona thing – our front and backyard was irrigated by flood irrigation.  We would open a valve in the backyard and water would fill the backyard to a depth of about 4″ high and then flow into the front yard.  My children loved playing in the water, especially in the summer.  I loved the price – only $56 for an entire year back in the 90’s. My neighbor’s garden.
With my newly inherited garden, I wanted to learn all I could and bought gardening books only to learn that they really did not apply to gardens in the desert.  For example, just because a book, (written and published on the east coast), says that a particular plant can be grown in zone 9, does not mean it can survive the heat of our summers.  I learned the hard way.  So, I decided to go to our local library and read all I could on desert gardening.  After that, I was hooked.  I took out some grass and planted a perennial garden in the front and also planted 40 roses as well.

My thirst for knowledge did not end and I was at a crossroads in terms of deciding what I wanted to do in terms of a career.  I had two years of college under my belt, but needed to figure out what to major in.  It was then that I decided to get my degree in Horticulture.  I have never looked back and absolutely love what I get to do.  And the rest they say is history…. Hiking through the desert with my four youngest children.
They love the desert as much as I do. Container Gardening Book Review & Giveaway: "Getting Potted In The Desert"

What Do Tomatoes, Starbucks and Christmas Have In Common?

Made in the Shade: Yellow Dot
26 replies

Is It Possible To Avoid The Winter Ugly Stage?

Pups In The Garden…Not The Soft, Cuddly Kind
Scroll to top