Some of you may have been following along as I have updated you on my daughter, Rachele’s, journey as she joined the Navy.

For those of you who are only interested in gardening content, here is a container of violas that we saw at the Art Institute of Chicago.  This will be the only gardening part of this blog post 🙂

We said “goodbye” to her in late March as she left for Great Lakes, IL for basic training.  During that time, we had very limited contact spread out with a few short phone calls and a few letters.

Homesickness, discouragement were the subjects of our earlier correspondence.  However, as time passed, we started to see her resolve to finish and do her best.

The date of Rachele’s graduation was circled on our calendar and we anxiously counted down the days until we could see her again.

The last test that she had to pass was her running test.  She had to run 1.5 miles in 15 1/2 minutes.  Rachele was seriously worried that she wouldn’t pass it because she had twisted her ankle and had shin splints.  If she did not pass, then she would have to stay longer until she passed and forgo the graduation – meaning that we couldn’t come and see her.  A number of sailors don’t pass.

We got a call from Rachele a few days before graduation telling us that when she was running the last test -she was determined to run as fast as she could because she didn’t want to stay in basic training any longer then she had to.

As she was running, she didn’t know that the lap counter wasn’t working correctly.  So, when she had finished running, she hadn’t run 1.5 miles….she had actually run 1.75 miles under 15 1/2 minutes!

So, our trip was on and her dad and I along with our oldest daughter, Brittney, boarded a plane for Chicago.

We arrived on a Thursday afternoon and drove up to Great Lakes, which is about 40 minutes north of Chicago.

It was hard to believe that we would see our Rachele in just a few hours.  We had to leave our hotel at 6:00 am, which was 4:00 on our internal Pacific time clock.

But, the adrenaline was flowing the morning of her graduation and we were up early and got to the Naval base.

The ceiling was decorated with state flags.  We could see the copper star and sun rays of the Arizona flag.

We had to arrive early for good seats, which we got.  But then, we needed to wait 2 1/2 hours for the ceremony to start. Thankfully, they had muffins and hot coffee.

We knew that the ceremony was about to begin with sailors holding the state flags came in and started marching in formation.

Did I mention that it was our 27th anniversary on that day?  I couldn’t think of a better way to spend it.

We then heard the drum corp and finally, it was time for 880 new sailors to enter…

Among those entering was my baby, now a sailor. I was so excited to finally see her!

Did I mention that it was quite cold that day?  The low that night was 39 degrees.  So, the sailors had their rain coats on until they entered.  They were holding their neatly folded rain coats.

Rachele is in the last row, the 8th person from the right.

Eighth from the left in the last row, above 🙂

The atmosphere was electric with all the families seeing their sailor.  There was a young girl who was wearing a very pretty dress and had a flower in her hair as she watched her boyfriend/husband march in.  She was all by herself and it was so sweet and sad to see.

Okay, you moms out there – I can tell exactly which one is my daughter from the back because “I gave birth to that behind” all those years ago, and would know it anywhere 😉

Kind of hard to explain exactly where she is in the photo above, but there are three girls in front of the blue/yellow flag.  Rachele is in the middle with the curly, brown hair.

The sailors stood for 1 1/2 hours for the entire ceremony.  They had to keep straight faces, no smiling.  I had binoculars so I could see her easily.  Her eyes kept looking up at where we were sitting.

Because fainting sometimes occurs when standing so long, they had drill sergeants-in-training walking between the rows of new sailors making sure that no one looked like they were going to faint.  No one did.

After the ceremony was over, the families moved down and greeted their sailors.  I can’t tell you how wonderful it was to hold Rachele in a my arms once again.

Here she is, wearing her dress whites.  She had lost a lot of weight and her uniform was loose because she was fitted at the beginning of basic training.

Sailors also have their dress blues, which they wear fall through early spring.

It was a beautiful day, but cold.

My two oldest girls, together again!

Rachele was showing her dad how shiny her shoes were.  She worked a long time polishing them.

It is pretty impressive how straight she stands now.  Her mom (me) has terrible posture, but I blame it on my dad, who did too 😉

Rachele got ribbons for completing basic training and for marksmanship (guns).

We weren’t allowed to visit all areas of the Naval base, but Rachele pointed out where she stayed.

Rachele had liberty for the rest of the day until 8:30 pm, which meant that she was able to leave the base for the first time since she arrived in March.

She was also reunited with her telephone, which we brought.  Look at how happy she is! Recruits aren’t allowed to bring their phones.

Driving with our two oldest daughters in the backseat brought back memories of us being a much smaller family before we adopted our three youngest children.

We told Rachele that we would do whatever she wanted that day.

Her first request was lunch at Chipotle, her favorite restaurant.

Then a trip to the local mall where we all went to see the latest Star Trek movie – I do love all things ‘Star Trek’.

We had a wonderful day with Rachele and returned to the base and went shopping at the NEX (Naval Exchange) for Navy souvenirs to take home with us.

We dropped off to sleep that night, exhausted, but so happy.

The next morning, the Navy put the new sailors on a bus and took them to the airport at 3:30 am.  There, they would wait at the airport until their flight took off for wherever their ‘A’ school was to be.  ‘A’ school is where they learn their skill that they will use in the Navy.

So, another early morning for us as we drove to the airport to visit with Rachele.  Sailors weren’t allowed to leave the airport and so we had to spend our time with her there.

Thankfully, O’Hare is a huge airport with lots to see and do.  We brought Rachele a set of civilian clothes (jeans, shoes and a shirt) that she would be allowed to wear at her ‘A’ school.  Here, she is showing us how to ‘correctly’ fold a pair of jeans.  This made me laugh because Rachele has NEVER been one to fold her clothes at home 😉

Starbucks was another treat that she enjoyed that day.

Video-chatting with her younger sisters and brother, who couldn’t come.

The yellow envelope is filled with her medical records, which she had to bring to her ‘A’ school.

One last meal with Rachele before her plane was scheduled to leave.  It was at this point that we started getting a little ‘teary’.

As we waited for her plane, my oldest daughter, Brittney, asked Rachele to teach her how to salute.

At this point, I was trying to stay strong for Rachele and not focus on how few minutes that we had left together.  It was too short a time.

As they announced boarding for her plane, Rachele started crying and I just lost it too (so did Brittney).  We hugged her goodbye and she boarded the plane with her fellow sailor who was going to the same school.

As for my husband, Brittney and myself – we walked out of the terminal with tears streaming down our faces.  I’m not sure what people thought of us, but I honestly didn’t care.

We drove Brittney to the other airport in Chicago (Midway) to catch a plane home and then my husband and I were on our own.

I must admit that I was not prepared for how sad I would be after seeing Rachele again and then having to say goodbye.  But, it was very hard that night.

Rachele is going to ‘A’ school in Fort Leonard Wood which is located in the middle of Missouri.  She will be there until mid September learning how to become a heavy equipment operator for the Seabees.

The good news is that Rachele is allowed to use her cell phone and we are able to talk to her everyday, which has helped a lot.

Sunday morning my husband and I drove to downtown Chicago and had a great time exploring Michigan Avenue with its architecture and gardens, which I will share with you soon.

Thank you for allowing me to share our military journey with you.  Your supportive comments and emails mean so much.

My next post will be full of beautiful gardens, containers and more that we saw in Chicago.

A Beautiful Flower and a Failed Vegetable

Noelle Johnson, aka, 'AZ Plant Lady' is a horticulturist, certified arborist, and landscape consultant who helps people learn how to create, grow, and maintain beautiful desert gardens that thrive in a hot, dry climate. She does this through her consulting services, her online class Desert Gardening 101, and her monthly membership club, Through the Garden Gate. As she likes to tell desert-dwellers, "Gardening in the desert isn't hard, but it is different."
June 3, 2013/9 Comments/by arizonaplantlady@gmail.com
https://www.azplantlady.com/wp-content/uploads/2013/06/Violas_Container.jpg 640 607 arizonaplantlady@gmail.com http://www.azplantlady.com/wp-content/uploads/2018/10/favicon.png arizonaplantlady@gmail.com2013-06-03 13:00:002021-01-25 03:37:32A Proud Mama and Two Sleepless Days… 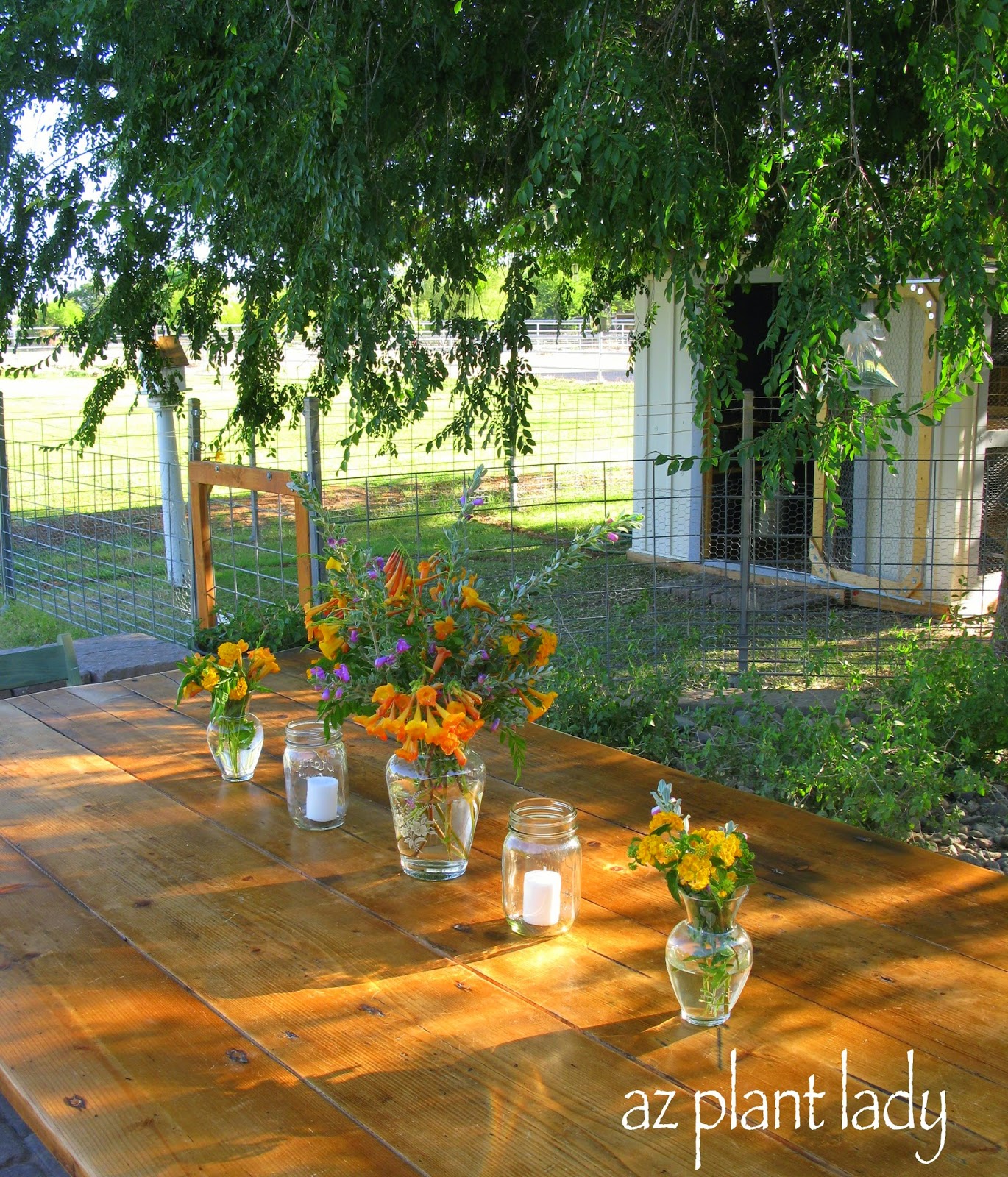 Need a Bouquet? Look No Further Than Your Garden

New Beginnings For a Cactus and a Daughter

Pruning and Blooms in the Spring Garden
9 replies

When trying to decide what to fill our containers

Believe it or not, it's the fact that plants have

It's time for another gardening tip as we are lear

As I promised you yesterday, I'm back with another

Noelle Johnson, aka, 'AZ Plant Lady' is a horticulturist, certified arborist, and landscape consultant who helps people learn how to create, grow, and maintain beautiful desert gardens that thrive in a hot, dry climate. She does this through her consulting services, her online class Desert Gardening 101, and her monthly membership club, Through the Garden Gate. As she likes to tell desert-dwellers, "Gardening in the desert isn't hard, but it is different." A Young Gardener and His Special Garden…

Memorial Day at the Family Farm Scroll to top